The reasons for divorce are as varied as the unique individuals who are ending their marriage. Many marriages end for reasons that are more well-known, such as infidelity or a lack of intimacy. Other marriages may end for reasons that may not be as commonly discussed. There is no one cause for divorce, but there are some characteristics that are more commonly found in marriages that end.

One thing that is certain is that in many — or most — cases, divorce can be emotional and challenging for everyone involved, regardless of the reasons for the end of the marriage. However, whatever the reasons are for ending a marriage, it can help to know that there is also hope. People can find paths to move forward in positive ways after divorce.

Stating The Reason For Divorce — Fault And No-Fault In the US, when a person files for divorce, they usually need to indicate on their divorce petition whether the divorce is fault or no-fault. In a no-fault divorce, neither spouse has to prove that the other was at fault for the end of the marriage. In a fault divorce, one spouse can request that a divorce be granted based on a fault of the other spouse. Common reasons for fault include infidelity, abandonment, or imprisonment. In states where fault-based divorce is an option, some people may choose to file for a fault-based divorce because mandatory separation times would be shorter or not required at all.

Not all states offer a fault option, but all states do offer no-fault divorces. Among states that allow both types of divorce, laws vary about what constitutes fault or no-fault. In the case of a no-fault divorce, neither spouse can prevent the court from granting the divorce. In fact, objecting to the divorce may be considered an irreconcilable difference that could then actually justify divorce. While a spouse or couple may not need to need to share why their marriage is ending, couples clearly have their own personal reasons for divorcing.

What Are Some of the Most Common Reasons Why People Get Divorced?

According to research, cheating on a spouse is considered a top reason for divorce in America. Extra-marital affairs are linked to 20-40% of marriages that end in divorce. There can also be co-existing reasons that are related to infidelity, such as anger, resentment, and a lack of trust. As is the case in many divorces, there may be more than one reason for the marriage coming to an end.

Money issues can cause problems in relationships. Of couples whose marriages ended in divorce, 41% faced financial challenges. Financial concerns that may affect marriages include spouses having different spending habits, varying financial goals, or resentment that one partner earns more money than the other. Also, couples who go into debt in order to fund their wedding may be more likely to divorce. A lack of financial resources can also put a strain on marriages. Even having plenty of money can become an issue. Those with high incomes may have difficulty agreeing on what to spend money on or may engage in overspending, for example.

Healthy communication can be the foundation of a solid marriage. When couples no longer talk to each other or don’t use healthy forms of communication, feelings of isolation may result. Communicating in a positive, productive way can not only help make sure the needs of both partners are being met but can also promote intimacy. If children are part of the marriage, healthy communication about parenting is also important. Without good communication, a marriage may begin to break down, especially early on.

Disagreeing with your partner can be expected from time to time. Two people agreeing all the time is rare (or perhaps even non-existent), but how you handle disagreements can make a difference in a marriage. Respectful communication about differences can be part of a healthy marriage. Partners who argue repeatedly might not feel they’re being heard or understood. These arguments can lead to frustration, insecurity, or isolation, which in turn can shake the stability of a marriage. Nearly 60% of couples who divorce say that arguing was an issue in their marriage.

Approximately one in three women and one in four men have experienced some form of physical violence from their intimate partner. This can include slapping, punching, pushing, choking, sexual assault, and other physically violent behaviors. Research has shown that domestic violence is a common cause of divorce. For your health and safety, it is crucial to seek help if you are in an abusive relationship and to know that you are not to blame, and you are not alone.

If you or a loved one is experiencing or has experienced relationship abuse or domestic violence, please seek help. The National Domestic Violence Hotline is free and confidential and offers support 24 hours a day, 7 days a week, 365 days a year. The number is 1-800-799-SAFE (7233). You can also text “START” to 88788 or use the live chat option online at TheHotline.org. The Hotline provides essential tools and support to help survivors of domestic violence so they can live their lives free of abuse.

A commonly cited reason for divorce is addiction. Often this is an addiction to drugs, alcohol, or another substance. However, other addictions can also be reasons for divorce, such as sex addiction or addiction to pornography or gambling. There is also research about alcohol use and partners. When one person in a couple is a heavy drinker and the other isn’t, the likelihood of divorce is greater; the divorce rate is about 50% for these couples. But when partners share drinking habits, the divorce rate is lower (30%).

According to one study, 47% of participants who’d divorced said that a lack of love or intimacy led to the end of their marriage. When spouses are no longer emotionally connected, the sense of partnership can be damaged. Without commitment, love, or closeness, some couples may find that growing apart becomes a reality. Additionally, if sexual incompatibility is an issue between the spouses, physical closeness and sexual satisfaction can be challenging and can affect the relationship.

Divorce involves getting a public decree, but the reasons for divorce can be very private and personal. Therefore, it can be difficult to say with certainty what causes the end of a marriage. However, there is some research that shows that the likelihood of divorce increases according to certain circumstances.

Research shows that those who get married when they’re under the age of 26 may be more likely to get divorced and that almost 50% of those who marry before the age of 18 are likely to divorce within ten years. The data also shows that 60% of spouses who are 20-25 years old when they marry are likely to eventually divorce — while waiting to marry until after the age of 25 decreases the likelihood of divorcing by 24%. However, research also shows that the divorce rate for couples over the age of 50 has doubled since the 1990s. This information does not mean that marrying young is a cause for divorce, or that being over 50 leads to divorce; instead, it shows that divorce rates statistically tend to be higher among these groups.

Studies have shown that people who are actively affiliated with a religion may be less likely to divorce. A person with no religious affiliation may be 14% more likely to divorce than average. Religion is very personal, and it is important to note that the data does not show that not being religious causes divorce.

Both IQ and level of education may be linked to a greater likelihood to divorce. Those who have dropped out of high school are 14% more likely to divorce. Those whose IQs fall in the “below average” range are 50% more likely to divorce than those whose IQs are in the “average” range or above. This information, like all of the data about the likelihood of divorce, does not indicate that education level or IQ actually cause divorce, but that they are linked with higher divorce rates. Children of divorced parents may be more likely to also divorce, according to research. The rate of divorce is also greater among people who have close friends or family members whose marriages ended. The likelihood of divorce may be 50% higher if one spouse’s parents are divorced. It may be as much as 200% higher when the parents of both spouses divorced. However, relationship history does not necessarily repeat itself.

How Common Is Divorce?

No matter what causes a marriage to end, divorce is quite common in the United States. However, in recent years, the rate of divorce has actually decreased, after a rise that spanned many decades. Between 1960 and 1980, the rate of divorce more than doubled. The rate stayed steady into the 1980s before beginning to decline. By 2007, the rate was decreasing — 40% of marriages ended in divorce. In 2020, the divorce rate hit a 50-year low. Since 2016, both the number of divorces and the number of marriages has been on the decline. There are some theories why this is the case. For instance, people may not feel the pressure to marry as early they did in past generations. They may feel more freedom and less urgency to get married. They may take more time to be sure they’re compatible with a future spouse. They also may wait to get married until they are more financially stable, which can ease marital stress.

If you are considering divorce or if you have any relationship concerns, therapy can help. Couples therapy and individual therapy can be very effective. In relationship counseling, a therapist can help you learn healthy ways to resolve conflict, build trust and intimacy, solve problems, set relationship goals, communicate effectively, and more. Individual therapy can also be a valuable option. If a couple decides to divorce, therapy can help individuals and families move forward. Licensed mental health professionals are available to work with you online at ReGain. At ReGain, you can get matched with the couples or individual counselor who is best for you. You can communicate by phone, messaging, or video, which can make effective therapy comfortable and convenient. Help is available to support you and to help you build healthy relationships and a fulfilling life. Previous Article
How Long Does It Take For A Man to Get Over Divorce? 10 Factors That Affect Healing
Next Article
7 Things Divorced Women Can Do To Move Past Their Marriage In A Healthy Way
For Additional Help & Support With Your Concerns
Speak With A Licensed Therapist
This website is owned and operated by BetterHelp, who receives all fees associated with the platform.
The information on this page is not intended to be a substitution for diagnosis, treatment, or informed professional advice. You should not take any action or avoid taking any action without consulting with a qualified mental health professional. For more information, please read our terms of use. 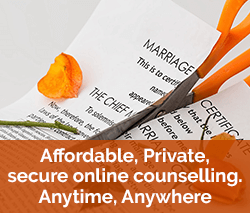